Sweden celebrates it national day every year on the 6th of June. The national day of Sweden is also known as the Sweden flag day.  The day is full of activities that include marches, flags, speeches by eminent people with the appearance of the King and the Queen as the highlight. Visit Sweden on this day to enjoy the patriotic spirit of the country. Complete your Sweden visa application now to get Sweden visa for your journey.

Gustav Erikkson Vasa, in the year 1523 A.D. on 6th June, was elected as the King of Sweden after he had led an uprising with the goal to break the union between the three Scandinavian countries of Sweden, Denmark and Norway. In the year 1809 on the sixth day of June, the new constitution of Sweden was adopted. With a strange coincidence in 1974 Sweden again adopted a new constitution on 6th June.

Later in the year 1983 the government decided to celebrate the national day of Sweden on 6th June. The national holiday for 6th June was only declared as recently as 2005. In 1893, at the Skansen open air museum, Stockholm, Arthur Hazelius came up with the idea of celebrating the ‘Svenska Flaggans Dag’, the Swedish Flag Day. It was also celebrated on June 6th. 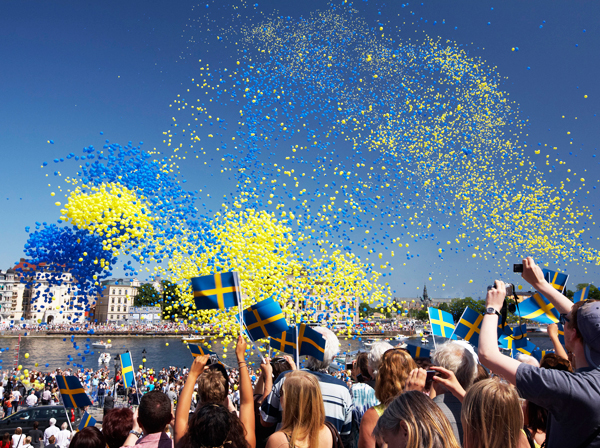 With so many different celebrations starting on the 6th of June, the date became an important part of the Swedish history. The Sweden Flag Day was officially renamed as Sweden National Day in the year 1983. Although many people are more enthusiastic when celebrating the Midsommers Day, the popularity of the Sweden national day is rising day by day giving the Swedish people another reason to celebrate and enjoy together. For all your Sweden Visa requirements you should prepare in advance so as not to miss the celebrations.

It can be seen that the upper echelons of the Swedish community attend the national day at the Skansen open air museum. The King and Queen of Sweden are presented with beautiful bouquets created using summer flowers by children wearing traditional peasant dresses. There are parades by people and speeches from dignitaries of the parliament and the royal family. It is gradually becoming a tradition after it was declared as a national holiday in 2004.

You can also plan a trip to the zoo and visit the entertainment park to rest and relax with your family in Stockholm. These places are also decorated on the national day and there is a different vibe in the air that can be felt during this time of the summer. The festive atmosphere of Sweden can help uplift and energize your spirit to take on the challenges that life throws at you. Visit Sweden to enjoy the hospitality of the country and to have an experience of a life time. Get your Sweden visa application filled at the earliest and enjoy a trip to Sweden on its national day.